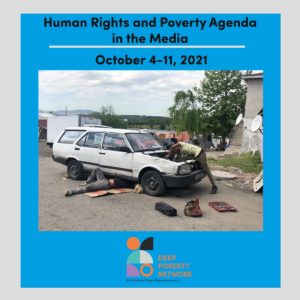 storyteller, 07.10.2021
Road to Recovery: Migrants in Djibouti Get Crucial Mental Health Support
At just 20 years old, the young Ethiopian migrant had planned to reach the Kingdom of Saudi Arabia (KSA) in search of work. However, his hopes were dashed when COVID-19-related border restrictions prevented him from reaching his destination. Instead, he became stranded in Yemen, where his mental state declined.  He wanted to return home to Ethiopia and crossed the Gulf of Aden in a boat controlled by smugglers to reach the Horn of Africa.

AP NEWS, 08.10.2021
What Peace Prize says about freedom in Russia, Philippines
What does the selection of two journalists, Maria Ressa, 58, of the Philippines and Dmitry Muratov, 59, of Russia, say about freedom of expression and the history of dissent in the countries of the 2021 peace prize winners?
“It is a battle for facts. When you’re in a battle for facts, journalism is activism,” Ressa said Friday.

thenewpaper, 08.10.2021
Shift towards a digital healthcare system inevitable
Speaking at this year's Singapore Health & Biomedical Congress organised by the National Healthcare Group, the experts said the move towards digitalisation also means patients will have to increasingly manage their own health.

08.10.2021, rotary
The Best Chance to Eradicate Polio is Now
We are also working on financing essential immunization coverage [universal access to all relevant vaccines], particularly in the provinces of the southern region of Afghanistan. We recognize that it’s not just a polio gap. There’s a much broader gap.

DAWN, 09.10.2021
Murder not honour
THE cold-blooded murder of two women in Swat, who had run away from abusive husbands and sought refuge in a women’s shelter (Darul Aman), demonstrates just how helpless — or uncaring — the state is when it comes to protecting the life and dignity of half the population of the country.

INDEPENDENT,  09.10.2021
Lebanon plunged into darkness ‘for days’ as country runs out of electricity
A government official told Reuters: “The Lebanese power network completely stopped working at noon today, and it is unlikely that it will work until next Monday, or for several days.” Lebanon has been racked by a wave of crises impacting all aspects of daily life since its economy began to collapse in 2019, with poverty, unemployment and inflation soaring amid vast discontent at a political system long accused of corruption and mismanagement.

ndtv, 10.10.2021
World Mental Health Day 2021: Understanding The Importance Of Good Mental Health At Every Age
With the ongoing pandemic, people of all age groups have suffered tremendously both physically and even more mentally. Every individual was affected and people had to face some serious issues. In reality, they had a huge impact on people who needed to be seen by a psychiatrist, psychologist or counsellor as it impacted the psychiatric development of a person. Today, more than 20-25% of the population have a mental health disorder.

rfi, 10.10.2021
Afghan NATO forces flee to Istanbul to seek refuge
Growing numbers of Afghans who fought alongside NATO forces are arriving in Istanbul looking for help from the countries they once worked with.T he two pilots live in Istanbul's Zeytinburnu district, dubbed by locals "Afghanburnu," because of its large Afghan population. Many here fled the Afghan conflict years ago. But Turkish President Recep Tayyip Erdogan is ruling out taking in any new wave of Afghans. He points out the country is already hosting nearly five million refugees, mainly from the Syrian civil war.

THE SACRAMENTO BEE, 11.10.2021
Huge fire extinguished at oil facility in southern Lebanon
Firefighters extinguished a huge blaze that broke out in a storage tank at one of Lebanon's main oil facilities in the country's south Monday after it sent orange flames and a thick black column of smoke into the sky.