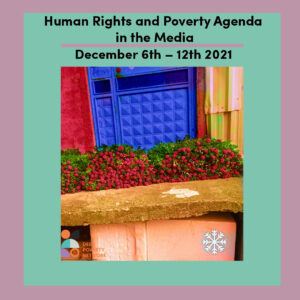 07.12.2021, The Guardian
Global inequality ‘as marked as it was at peak of western imperialism’
Although the World Inequality report found inequalities between nations had declined since the end of the cold war, it said inequality had increased within most countries and had become more pronounced as a result of the global pandemic of the past two years. The research showed the richest 10% of the global population currently taking 52% of global income.

10.12.2021, The Economic Times
Cry over inequality, harder over poverty
Political empowerment is the first key ingredient of poverty removal. People with political agency will demand and obtain education and healthcare. It will also erode the structural inequality and sectarian divides in society. Social cohesion and individual agency together make for broad-based growth that emancipates.

10.12.2021, THE WORLD BANK
How Kenya is Making Home Ownership Possible for Low-Income Households
The Kenya Mortgage Refinance Company (KMRC), which was granted a license to conduct mortgage refinance business in 2020, is yielding a positive impact on potential borrowers and the supply of long-term finance from Kenya’s financial cooperatives.

11.12.2021, BBC
US inflation hits highest level for nearly 40 years
American shoppers, especially those on low incomes have felt the pinch of higher prices, with annual inflation at rates not seen for 40 years. The latest figures show prices rose 6.8% in the year to November.

11.12.2021, abc News
More than 15,000 Australians in outer suburbs struggling during pandemic, report finds
One in five Australians in the outer suburbs has been living in "financial survival mode" during the pandemic and is more likely to feel stressed, frustrated and anxious than the national average.