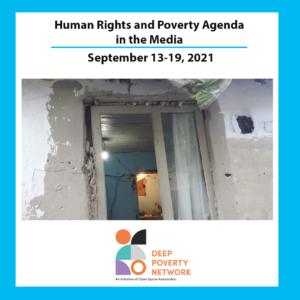 abcNews, 14.09.2021
Young people experiencing 'widespread' psychological distress over government handling of looming climate crisis, researchers say
Nearly half of all young people surveyed, more than 45%, said their feelings about climate change negatively affect their daily life and functioning, according to the study. They feel a lack of trust toward the government and doing not enough which leads to their climate anxiety.

Global News, 17.09.2021
China Rising, Episode 10: Racism
Dramatic rise in anti-Asian racism in Canada during the COVID-19 pandemic, fuelled by political rhetoric and misinformation about COVID-19. “So within a short amount of time in my childhood, I really have experienced many different migration moves. what it takes to really integrate and feel that sense of belonging,” explaind Ling.

THe Week, 18.09.2021
The much publicised US drone hits against ISIS-K in Kabul killed 7 children, 0 terrorists
Due to the Taliban and what is going on in Kabul 13 US service members and over 169 Afghans iwere killed by a suicide bomb. As per data provided, 10 civilians, including up to seven children, were also killed.

BBC, 18.09.2021
Migrants in Texas: US 'to fly thousands back to Haiti'
The US government is set to fly back to Haiti thousands of migrants who have gathered under a US-Mexico border bridge in recent days, US media report. Describing the situation as "unprecedented" and "surreal", he said the border patrol had been overwhelmed and "agitated" migrants were living in impossible conditions. The number of migrants detained at the US-Mexico border in July exceeded 200,000 for the first time in 21 years, government data shows.

U.S.News, 18.09.2021
Greece Opens New Migrant Camp on Island to Reduce Crowding
Greece is bracing for a new wave of migrants after the Taliban took over Afghanistan, which the new closed, monitored facility offers much better living conditions, is outside city limits, and has much enhanced security measures to protect the beneficiaries, personnel but also local communities,” Mitarakis said.

CNN, 19.09.2021
Cuba vaccinates children as young as 2 in strategy to reopen schools, economy
In September, Cuba became the first country in the world to begin the mass vaccination of kids as young as age 2 against Covid-19. While they are getting vaccinated the watch brightly painted clown performs his ear splitting act but like adults children in Cuba will require three shots before they are considered fully vaccinated.

Foxs News, 19.09.2021
Texas doctor claims state’s new abortion law is illegal, says he has already violated it
On Sept. 6, five days after the new Texas law took effect Sept. 1, he writes, he provided an abortion to a woman in the first trimester of her pregnancy – a violation of the state law.