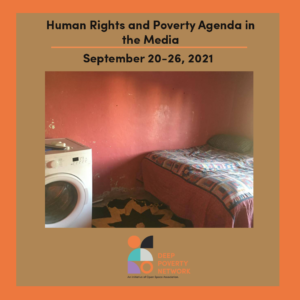 abcNews, 14.09.2021
Young people experiencing 'widespread' psychological distress over government handling of looming climate crisis, researchers say
Nearly half of all young people surveyed, more than 45%, said their feelings about climate change negatively affect their daily life and functioning, according to the study. They feel a lack of trust toward the government and doing not enough which leads to their climate anxiety.

BROOKING, 02.06.2021
Extreme poverty in the time of Covid-19
Due to lockdowns and social distancing measures, people have lost jobs and livelihoods, leaving them unable to pay for housing and food. Schools have been closed and some children may not return, shutting off one of the main pathways out of poverty for low-income children. Women and girls have been especially impacted by these school closures.

WHO, 22.09.2021
New WHO Global Air Quality Guidelines aim to save millions of lives from air pollution
New WHO Global Air Quality Guidelines (AQGs) provide clear evidence of the damage air pollution inflicts on human health, at even lower concentrations than previously understood. The guidelines recommend new air quality levels to protect the health of populations, by reducing levels of key air pollutants, some of which also contribute to climate change.

BROOKINGS, 22.09.2021
What do we know about the effects of COVID-19 on girls’ return to school?
For many girls, COVID-19’s associated economic crises exacerbated gender inequalities that are more acute among older adolescents—from increased limitations on their freedom of movement to the need to care for younger siblings and perform household chores to the likelihood of being married off to relieve pressure on sparse household resources.

CBC News, 23.09.3032
UN summit takes aim at global food dysfunction amid spike in hunger, malnutrition
Billions of people are overweight, millions are hungry, one third of food is wasted and the way the world produces, processes and consumes food generates one-third of greenhouse gas emissions, UN Secretary-General Antonio Guterres said on Thursday at the first global summit on the future of food.

npr, 23.09.2021
Border Crisis: Thousands Of Haitians Flown to Haiti Against Their Will
Thousands of Haitan migrants who were camping out under a bridge in a Texas border town seeking to cross the Rio Grande and find refuge in the US are now being forced back to their home country.

CTV NEWS, 23.09.2021
As Petito case captivates U.S., missing Indigenous women ignored
While the search for a 22 year-old-women became an internet sensation, homicide is the third-leading cause of death among Native women who are murdered at rates more than 10 times the national average, according to federal data.
Media coverage of homicides of Indigenous people was more likely to use violent language and portray the victim in a negative light, according to the Wyoming report.

npr, 24.09.2021
Tens Of Thousands Of Black Women Vanish Each Year. This Website Honors Their Stories
“Our Black Girls” is a website which centers the often-untold stories of Black girls and women who have gone missing or, in some cases, were found dead under mysterious circumstances.

nbc News, 24.09.2021
Mexico Supreme Court decriminalizes abortion
Mexico is the second-most Catholic country in the world and the Supreme Court there has decriminalized abortion. NBC News' Priscilla Thompson explains what this means for people in the country.

news.com, 24.09.2021
Afghans left feeling hopeless two weeks into Taliban rule
It’s been two weeks since the Taliban officially took over Afghanistan, with the militant regime now fighting for international recognition. Furthermore Afghanistan’s central bank has access to only a fraction of its usual financing, and is cut off from the international banking system and its own foreign currency reserves.

OXFAM international, 24.09.2021
The Food System Summit failed hundreds of millions going hungry everyday – Oxfam reaction
We cannot end the hunger pandemic without addressing the climate crisis, the erosion of agricultural biodiversity, or the deep inequalities and human rights violations that perpetuate poverty, hunger and malnutrition. There are a lot of issues from the ground of causes, but these are looked over which causes no long term solution.

DEMOCRACY NOW, 24.09.2021
“Our Health or Our Homes”: Tenants Facing Eviction Help Introduce New “Keeping Renters Safe Act”
Due to the Delta variant across the United States the consequence is the housing and eviction crisis. More than 11 million households are now behind on rent. Most of those evicted are Black or Latinx, and the majority are single women with children.

Common Dreams, 24.09.2021
African Leaders Condemn Vaccine Apartheid as an 'Indictment on Humanity'
"It is an indictment on humanity that more than 82% of the world's vaccine doses have been acquired by wealthy countries, while less than 1% has gone to low-income countries." The data shows off a clear inequality towards Africa´s 1.3 billion population.

ALJAZEERA, 24.09.2021
Turkey: Student housing protests highlight soaring prices
Nightly student protests across Turkey against unaffordable rents are a sign of a wider cost of living crisis. The student protest movement, called “We Can’t Shelter” or Barinamyoruz Haraket in Turkish, is asking the government to take measures like limiting rents, building more housing, and offering more subsidies and scholarships for students.